If you’re under a certain age, you need to understand the subtext of this 1977 video. Bing Crosby was very, very straitlaced and conservative, a strict Roman Catholic, and David Bowie… wasn’t. 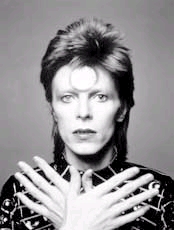 I wish I could find the “original,” which was performed live, in which Bing is playing the piano (no orchestral accompaniment) and Bowie standing nearby singing, and they never look at each other. It underscored the cultural tension between the two, which made it all the more poignant — like watching the Crips and Bloods Mixed Chorus, maybe. It’s also helpful to know that “White Christmas” was a huge hit for Bing Crosby–his signature song, in a way. This video is lovely, too, and Bing is funny, but I think it’s overorchestrated, and the impact is blunted a bit. Still, it’s a treat. I hope you enjoy it.

P.S. If memory serves, Bing Crosby died about a month after the video was made. He was playing golf at the time. For more background on the video, click here , whence I stole the photos.

2 thoughts on “NOTES ON BING & BOWIE VIDEO (BELOW)”