Christmas Can Be Cancer-Causing 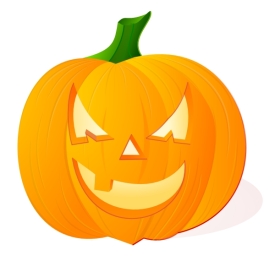 Dear Sister Alma Rose – Every year at about this time I get a little crazy. It starts when carved pumpkins appear on people’s front porches. The jack-o-lanterns seem to be sneering at me. “We’re pumpkins,” I can almost hear them hissing, “like, you know, in pumpkin pie for Thanksgiving, which will be here VERY SOON, and close upon its heels will be the HOLIDAY SEASON, and you haven’t even STARTED your Christmas CHORES.” Then they laugh this eerie laugh. “HA-hahahaha.” And they’re right. Or, they would be if pumpkins could talk. But their gap-toothed mouths don’t actually MOVE. Although I’m almost sure I saw one of them blink. 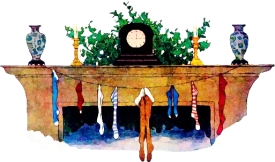 I kind of go all out for Christmas. I make dozens of jars of Sherry’s Cherry-Vanilla Marmalade for friends. I make and send more than a hundred individually cross-stitched Christmas cards, each with a handwritten note. I write, illustrate, print, and bind about a dozen books for the children in my extended family. I’m an enthusiastic bell-ringer for the Salvation Army. I make and shop for gifts, not just for my own family and friends, but also for our Adopt-a-Family families (we have five this year). I stencil all the wrapping paper myself, on 100-percent recycled unbleached newsprint. And, of course, we have our annual Holiday Open House, which requires two full days of cleaning, decorating, baking, and cooking. I don’t actually grind my own wheat or use honey from my own beehives, but I’ve thought about it. Oh, and I sing in a community choir that gives three public performances, and of course there are extra rehearsals, plus I organize the children’s Christmas pageant at church, and make all the costumes. There’s more, but you get the idea, don’t you, Sister Alma Rose? The month of December is one big panic attack. What should I do? —Signed, Burned Out in Buffalo

Dear BOIB — Y’all need to give Sister Alma Rose a minute or two. Y’all have caused her to have a panic attack. 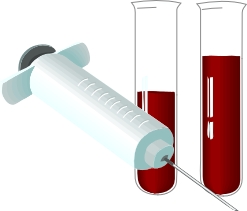 It’s too late to point out that y’all could have done three-fourths of y’all’s “chores” back in August… although, Sister Alma Rose supposes, y’all probably run around in a minor-league frenzy the rest of the year too.

Fortunately, Sister Alma Rose has several helpful suggestions. Here they are, in no particular order:

On or about December 1, break a leg or contract a temporarily debilitating but not life-threatening illness, such as mononucleosis — anything that will require y’all to spend about three weeks in bed…. 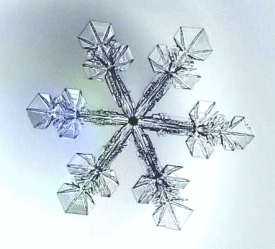 PROS: (a) Y’all will have time to reflect on the meaning of Christmas and the Winter Solstice, which is, briefly, the returning of the Light and the reminder that Life will soon emerge from the frozen earth even though you forgot to mulch the rosebushes. (b) Y’all will discover that the world won’t come to an end simply because you haven’t made marmalade or cross-stitched cards or sewed pageant costumes. (c) Y’all will get some much-needed rest. (d) Y’all won’t make yourself and everybody around you miserable with the stress generated by your crazed, obsessive activity (see Table 1).

CONS: Y’all’s injury or illness has to be genuine. Sister Alma Rose doesn’t know of a reliable way to break one’s leg without putting the rest of one’s limbs and one’s internal organs in jeopardy (as would be the case, for example, if y’all hurled yourself out of a third-story window) unless y’all just whack at y’all’s leg with a ball-peen hammer, which y’all might be able to do if y’all have fortified yourself with immense quantities of hard cider. But what if y’all’s hubby walked into the room in which y’all were hammering away at your tibia? He’d likely say something like, “Darling, why are y’all butchering y’all’s shin?” and y’all would gibber, being under the influence of the hard cider, you know, and y’all’s husband might thereupon insist that you take a prolonged “vacation” at a “special hotel” where everybody wears white and where none of the “guests” is issued sharp objects, not even a plastic fork.

As for contracting mononucleosis, even supposing y’all were able to find someone who had the disease (perhaps by taking out a classified ad) and who could be persuaded to cough directly into y’all’s face… mononucleosis is nothing to mess with, inasmuch as in rare cases it can produce complications such as meningitis and possibly death, which, though it does solve the wrapping-paper problem, is perhaps an inordinately high price to pay.

Substitute Welch’s Grape Jelly for Sherry’s Cherry-Vanilla Marmalade. Find oversized bathrobes for the children to wear at the Christmas pageant. Give fruit baskets to the adults on y’all’s list, money to the older children (a dollar per year, agewise), and diapers to the babies. For the fruit baskets, don’t even THINK about growing the fruit yourself in y’all’s backyard. Have a BYOB potluck open house. Do NOT make cross-stitched Christmas cards; they only cause the recipients to feel guilty when they throw them away. Send postcards instead. That way y’all don’t even have to seal envelopes.

Calculate the health effects of y’all’s holiday activities. Make an Excel table, per the following example: 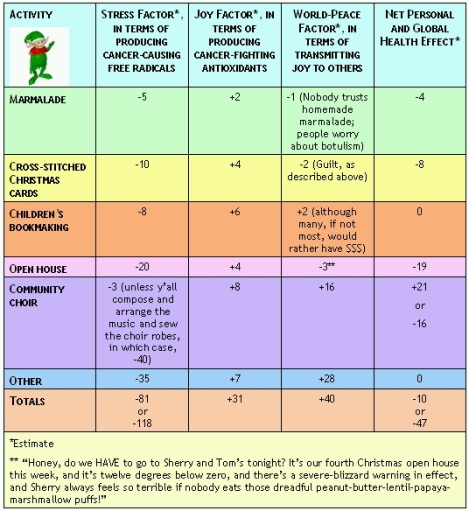 As this table clearly and scientifically demonstrates, y’all are NOT doing yourself or the world any favors by maintaining this frantic holiday pace. Furthermore, the table doesn’t account for a great number of other Seasonal risks: indebtedness comparable to that of General Motors, toxic mall ambience further polluted by continuous replays of Chipmunks Christmas album, antagonistic attitude of people who don’t celebrate Christmas and don’t think anybody else should either, danger of cat upsetting Christmas tree and spilling water that shorts out electronic Christmas presents already wrapped with arithmetical precision, as if going to be inspected by army drill sergeant, and set under tree, etc. 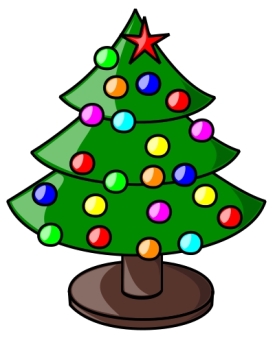 Please do not misunderstand. Sister Alma Rose adores Christmas. She loves every tacky song, even “Rudolph the Red-Nosed Reindeer” as sung, a little peevishly, it must be said, by Burl Ives. She enjoys glittery parties and judiciously spiked punch. She likes over-the-top outdoor decorations that are visible to the naked eye from Saturn (never mind that there are, as far as we know, no eyes, naked or otherwise, on Saturn). She is crazy about making and giving and receiving gifts. She doesn’t even mind that for a month or so the entire town of Hilltop is transformed into a giant red plastic Thing.

Sister Alma Rose realizes, however, that even she has limitations. When celebration crosses the line into consternation, a highly contagious upper-respiratory infection cannot be far behind. She recommends that y’all follow Sister Alma Rose’s example, which, when in doubt, is always an excellent practice, and particularly so during the Holidays: minimize the stress factor, maximize the joy factor, and never, ever, do all your shopping on Christmas Eve at Bob’s Pharmacy, which Sister Alma Rose once did, and everybody received sinus irrigators.

One thought on “Santa Clues”