Fanny, who will be 13 in August, is about to leave for Daylight, the almost-inaccessible mountaintop home of the Ancients, with her mentor, Sister Alma Rose, and Henry, the man she knows she will someday marry. Fanny has learned only recently that she is a reincarnation from the Ancients. She will live with them until she feels that she is ready to serve among the “Lowlanders,” doing the healing and peacemaking work that will become her mission.

I am packed to go “up the mountain” — indefinitely, although Mama and Daddy will be allowed to visit because they’re “special,” and I can come home as often as I want, maybe via magic carpet, I’m not really sure. Sister Alma Rose and Henry will be taking me. Henry will stay as long as I do; Sister Alma Rose is keeping mum about her plans. 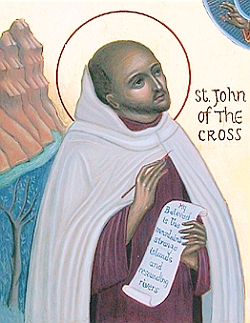 While we are waiting to leave, Sister Alma Rose has assigned me to read The Metaphysics of Mysticism, A Commentary on the Mystical Philosophy of St. John of the Cross, by Geoffrey K. Mondello, a book of which “the goal… is unabashedly epistemological.” Whew! What if it had been gastronomical? Would I have been forced to eat the book? Would it have eaten me? And tidied up afterward?

It is heavy going; the author uses a lot of words such as solipsistic. And only occasionally can I infer the meaning of an unfamiliar word from the context, because the context is full of words such as refractory (not to be confused with refectory, which is where St. John and his fellow Carmelites went to eat dinner).

And so I slog along, reading indoors at the computer so that I can easily look up words every three or four sentences, until it is just irresistibly gorgeous outside, when I lug the unabridged dictionary out to the garden or go read on Sister Alma Rose’s porch. Sometimes I think she forgets I’m only 12.

Detail from Riding a Flying Carpet, by Viktor Vasnetsov, 1880

Mama was an only child and so was her cousin George. (Everyone I know just calls him “George,” even my little brothers.) George and his parents— Mama’s mother’s brother and his wife (“Big George” and Jake, I don’t know her real name) farmed outside of Hilltop when Mama and George were kids, so they were like siblings.

Now George lives in Chicago, but he is hardly ever there because he makes huge amounts of money as a freelance photographer who specializes in going with linguistic anthropologists to remote places like Papua New Guinea (where more than 850 indigenous languages are spoken!) and the Amazon rainforest. So when he is in the U.S., which is hardly ever, he comes to see Mama or she goes to Chicago, and since he was at home last week, and I was going to be leaving soon, Mama, Henry, and I all flew to Chicago. Henry bought our tickets, and I still don’t know where he gets all his money, even though his parents are rich, but they don’t know where he is, and I don’t understand that either. I’m sure he’ll tell me when he’s ready to tell me (this is the new, patient, serene Me talking).

We didn’t tell George that I am going to Daylight, although if you could tell anyone and not be scoffed at, it would be George. We also didn’t exactly explain about Henry, but George takes everything in stride. His wife, Annette, used to go with him on long assignments, but she and their baby (Annette was five months’ pregnant) died on Borneo, not from some exotic jungle disease or snakebite or anything. She was standing at the edge of a four-foot embankment near a dry streambed when an insect flew into her eye, and she lost her footing and belly-flopped onto the hard ground, and she died of “multiple internal injuries” in a helicopter on the way to the hospital.

This tragedy happened while Mama was carrying me, so the baby, who was a girl, would be about my age. I used to wonder if I might be an unwelcome reminder of George’s unborn child— he always seemed to be scrutinizing me— but Sister Alma Rose has taught me to not be self-conscious but to observe rather than “feeling observed,” and when I started observing George I realized that he scrutinizes everybody, because he is actually interested. George is a person who lives in the moment. As Sister Alma Rose says, George remembers “where he is” (here) and “what time it is” (now). He’s kind and sensitive but not at all sentimental. He probably doesn’t know it, but he practices “mindfulness.”

George’s girlfriend, Carla, swears like a sailor and is physically the kind of woman who could have been called a “blond bombshell” in an earlier era. Carla might be a little on the flashy side for high society, and you might assume that she was no rocket scientist, but you’d be wrong because that’s exactly what she is, an aerospace engineer who was an associate professor at some university with initials like M.I.T. but not M.I.T., but now she’s a handsomely paid consultant with ultra-ultra security clearance, and she loves to talk but she doesn’t talk about her work. Carla lives in George’s apartment when he’s away and when he’s home. Daddy doesn’t approve, not that anybody asked him.

George is a self-professed Christian who says he has seen God’s grace “up close and personal” too many times to doubt its reality. It was grace, he says, that brought him and Carla together and that keeps their relationship strong though they both travel a lot and sometimes Carla can’t tell even George where she’s going.

Daddy thinks Carla’s a spy. That’s because a long time ago, just before Mama and Daddy got married, there was a woman called Dagmar who was another “blond bombshell,” and she worked at the Diner and chewed gum and had this Bronx accent, and Daddy told Mama, “She’s a spy,” and Mama said, “What would a spy be doing in Hilltop?” and Daddy said, “Keeping a low profile,” and Mama laughed because Dagmar would have stood out anywhere, but it turned out that Daddy was right and Dagmar was a spy for the Russians or the Chinese or something. Daddy said she was less like a waitress than like somebody playing a waitress on television, and the gum-chewing and Bronx accent were “overkill.”

Loving is the main thing 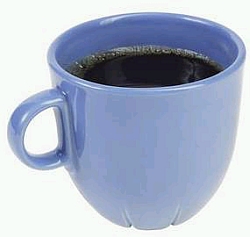 Our day in Chicago ended too soon. We all had a wonderful time drinking coffee and eating George’s “culinary specialty,” fruit salad made with cream cheese and marshmallow cream and it is just to die for, if everyone had left the room I would have been compelled to eat it all.

As Sister Alma Rose has told me over and over until it finally sunk in, you cannot be loving when you are being an “observee” instead of an observer.  And loving is the main thing. So I got over myself; I relaxed and observed instead of being self-conscious and feeling as if all eyes were on me. It was fabulous, wonderful, liberating… liberating most of all. And when we left, George told Mama he thought I had “grown into a lovely young woman.” I didn’t need George’s approval any more, but it felt good. Validating. “The truth shall make you free.” **