I never had to think much about homosexuality until George and Tony moved to Hilltop. Tony is a nurse and George is a woodworker. He makes the most beautiful things out of wood that you ever saw, and he can fix anything. Miss Price took George her granny’s rocker to be “repaired” — it was literally in shards, probably twenty pieces, and George reassembled it, and now to look at it you would never know it had been broken, that’s how well he put it back together. 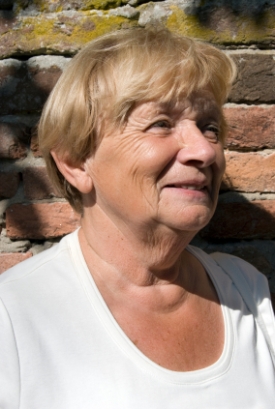 But it was different with George and Tony. George, too, was born and raised in Hilltop, but he left years and years ago and went to live in St. Louis. When George’s mother and father (Mr. and Mrs. Douglas, who used to own the Hilltop Steak House and then sold it to the Connors, who were vegetarians, so that was a bit of a mystery, and then they, the Douglases, retired, and then Mrs. Douglas died from a blood infection or something); anyway, when the Douglases came back from St. Louis, Mr. Douglas railed at anybody who would listen — about George, and how he was a “sissy” and how he and Tony had “matching wedding rings,” which made Mr. Douglas “want to barf,” and how George, was, in Mr. Douglas’s exact words, “no son of mine.” Mrs. Douglas just wept.

George had had a much-older brother, Jimmy, who was killed in the war in Vietnam, and one April afternoon, Mrs. Douglas (before she died), trudged up the hill to confer with Sister Alma Rose, and they sat talking on the grass-green porch and drinking Mr. Truman Lafollette’s heavenly lemonade, and Mrs. Douglas told Sister Alma Rose that she had already lost one son and she wasn’t going to lose another, and she wanted to go visit George but she was afraid she’d burn forever in Hell, because of what the Bible says, about homosexuality and about being disobedient to your husband, though if George was going to be burning in Hell too, at least she, Mrs. Douglas, would be with George, and what did Sister Alma Rose think?

Judge not, less’n y’all be judged

Everybody in Hilltop knows that Sister Alma Rose knows the Bible backward and forward, and the first thing she said to Mrs. Douglas was, “The Gospel of Matthew admonishes, ‘Judge not, less’n y’all be judged.’” Then she said that nowhere does the Bible condemn loving, monogamous relationships but rather “licentiousness” and “fornication,” and that even if homosexuality itself were a sin, for which she, Sister Alma Rose, could find “no substantiation” in the Bible (and here she talked about the homosexual relationship between King David, before he was king, and Jonathan, son of Saul), “did the Lord, or did he not, make of himself the ultimate sacrifice for our sins?”

Sister Alma Rose, though she did not say so to Mrs. Douglas, believes in reincarnation. She has told me that it is “not unbiblical” to think that all roads lead to Heaven and all the people on all those roads arrive there after many lifetimes, and, she adds enigmatically, “I ought to know.”

In any case, Mrs. Douglas, defying Mr. Douglas, visited George and Tony in St. Louis at least twice a year, and she became quite fond of Tony and called him her “other son.” And then, well, she died, and Mr. Douglas said, bitterly, that it was “a judgment upon her.”

George and Tony came to Hilltop for the funeral. At the reception afterward, which was in the ballroom, for Pete’s sake, of the Douglases’ huge dark-green Victorian house, about half the guests (along with Mr. Douglas) ignored them completely, the other half were warm and friendly, and somebody spray-painted obscenities (in neon yellow) on their beautiful cherry-red Ford F-250 extended-cab pickup truck with its sleek red-and-chrome slide-on camper. When George and Tony left to go back to St. Louis the next day, the spray-painting was gone and the truck looked as shiny and new as it had when they arrived, and nobody, except possibly Sister Alma Rose, who knows everything, is sure how that happened.

About a year after Mrs. Douglas died, Mr. Douglas was found to have Parkinson’s disease, and he blamed Mrs. Douglas for that, saying it was “a judgment she brought upon” their house. For a while he did okay on his own, but then he got to the point where he couldn’t put an eating utensil into his mouth without all the food falling off first, and Dr. Deirdre Barstow told him that if he didn’t go to live in the Hilltop Nursing Home he would die of starvation or else fall down the stairs and kill himself that way, and Mr. Douglas said he’d rather starve to death than live in “that place,” meaning the Hilltop Nursing Home, which, he said, was full of “crazy old people and the stench of their incontinence.” He said, “I’ll be damned if I won’t die in the same house I was born in,” to which Dr. Deirdre Barstow replied, “Well, Doug [which is what most adults call Mr. Douglas], you very well might, but the only way I’ll allow you to stay here is if George and Tony move in and take care of you, because the house is falling apart and so are you.” Dr. Deirdre Barstow can be a little scary.

Well, Mr. Douglas was between a rock and a hard place. He told Dr. Deirdre Barstow that he’d just go out to the wreck of a building that used to be a carriage house, and he’d get his shotgun and blow his brains out. He was half-starved and was so unsteady on his feet that the attempt itself would have been suicide, Dr. Deirdre Barstow told Sister Alma Rose, but she, Dr. Barstow, was sure that he, Mr. Douglas, would try it anyway, so she put Mr. Douglas in the hospital for a few days, and she called George on the phone and told him what was what.

Three days later, Sister Alma Rose and I, on our way home from Ninghong’s little store, watched as the red pickup truck and camper pulled into the Douglases’ driveway and three people got out: George, Tony, and Tony’s very pregnant twin sister, Petra, who had been raped (Sister Alma Rose told me later) by one of her father’s drinking buddies. Tony and Petra’s dad and mom had insisted that Petra have an abortion, but Petra refused, saying, “A baby’s a baby,” and so her parents, who had six other children, had thrown her out of the house and disowned her, as they had disowned Tony years before.

Tony and Petra looked a great deal alike. They were exotically beautiful, with thick, curly black hair and smooth olive skin, high cheekbones, full lips, and strong, stubborn chins. I had time to notice this as Sister Alma Rose was tugging me across the street to “give them a proper welcome, because they won’t get one in that house,” gesturing with her head toward the dark-green Victorian.

Out in the driveway, Sister Alma Rose hugged George, and then Tony, and then Petra, and then they all hugged me. George thought he might have to break in to the house, but Dr. Deirdre Barstow drove up in her little Volkswagen Beetle just then with Mr. Douglas, and Sister Alma Rose and I went on our way. Petra’s coming was “providential,” Sister Alma Rose told me, though I couldn’t see how Providence could have had any part in a pregnancy that resulted from a rape.

A week later, when Sister Alma Rose and I were playing canasta on the big porch after supper at Hilltop Farm, we saw George and Dr. Deirdre Barstow walking up the long driveway past the virgin oak grassland, which is Sister Alma Rose’s pride and joy. Mr. Truman Lafollette appeared out of thin air, I do not know how that large man comes and goes so stealthily, with two glasses full of ice cubes, and he poured lemonade from the pitcher into the glasses and placed them on the wicker table by the two empty wicker chairs, and then he disappeared like a chimera, and George took a huge, greedy gulp before he set it down and smiled.

“Are y’all settled in?” asked Sister Alma Rose. “How is y’all’s papa?”

“Besotted,” George said with a grin, “over Petra. He calls her ‘Rocky’ and lets her win at chess.”

Dr. Deirdre Barstow, who had also sat down and who was sipping her lemonade with ladylike dignity, smiled broadly. “You wouldn’t believe the change in Doug,” she said. “I don’t mind admitting that Tony knows much more about advances in Parkinson’s treatment than I do. Petra’s a terrific cook and not much of a nurse, and Tony’s a superlative nurse and can barely boil water, so they do sort of a tag-team nursing job on Doug, while George is putting the carriage house back together and fixing up the main house.”

George chuckled. “At first, I think Dad just squinted and tried to pretend that Petra and Tony were the same person,” he said, “but now he calls irritably for Tony when he wants help getting down the stairs so he can sit on the porch. I mostly stay out of the way, and he doesn’t say much to me, but when he does, he calls me ‘Sonny,’ like in the old days.”

Anyway, between the medicine Dr. Deirdre Barstow had prescribed, based on Tony’s recommendation and her own research, and Petra’s “terrific” cooking, Mr. Douglas’s condition improved so much that, when Petra had her baby boy, Mr. Douglas visited her in the hospital, supported on one side by his son and on the other by Tony.

“Little Doug” is two years old now, and he calls Mr. Douglas “Grandpa.” The dark-green Victorian house, with new cream-colored shutters and with its refurbished carriage house, is a showplace. Mr. Douglas no longer needs Tony’s ministrations twenty-four hours a day, so Tony works in Dr. Deirdre Barstow’s office, and none of her patients seems to mind, even the burly macho buffalo-plaid-flannel-shirt-and-feed-store-cap types who used to fall down laughing at Mr. Douglas’s “homo” jokes.

Mr. Douglas, it must be said, still doesn’t understand why George doesn’t marry Petra “and make an honest woman of her.” But he plays chess with Tony, although he won’t let Tony win as he does Petra. And whenever Little Doug goes somewhere with Petra, even for an hour or two, Mr. Douglas frets until they get home. Then he calls for Little Doug. “Get over here right now,” he growls, “and give your grandpa some sweetness.” And Little Doug, who always gets a lollipop on his outings with Petra, climbs into Mr. Douglas’s lap and covers his face with sticky kisses. And Mr. Douglas doesn’t even wipe them off.