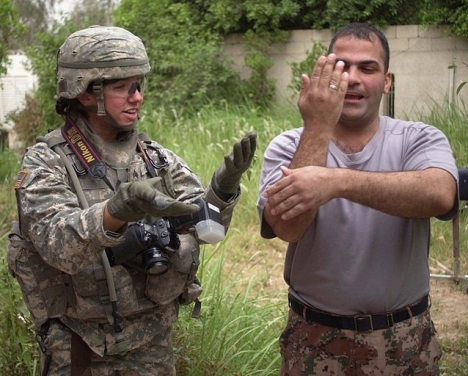 U.S. Army Sgt. Tierney Nowland teaches the Macarena to an Iraqi army soldier from 2nd Battalion, 1st Brigade during a break from a cordon and search mission in Ameriyah, Iraq, May 16, 2007. Nowland is a combat cameraman with the 982nd Signal Company out of Wilson, N.C. --U.S. Army photo by Spc. Elisha Dawkins

A dose of infectious dance floor favorites like the cheesy* “Macarena” and even classic waltz melodies may just be what you need to fight off the flu and other maladies…. In separate studies, scientists from… Sussex University and the Max Planck Institute… discovered that listening to approximately “50 minutes of uplifting dance music increases your levels of antibodies….” Apparently, after listening to dance-worthy ditties, the subjects’ levels of the antibody immunoglobin A were heightened. This was welcome information as immunoglobulin A is the immune system’s first line of defense against any threat of infection…. Aside from keeping you healthy, a dose of dance music can reduce the levels of the stress hormone cortisol. Dr. Ronny Enk, a neurocognition expert who led the Max Planck Institute research team, explains: “We think the pleasant state that can be induced by music leads to special physiological changes which eventually lead to stress reduction or direct immune enhancement….” In any case, Dr. Enk emphasized that they “did not use relaxing music, but rather exciting music that were joyful dance tunes from different centuries.”  —simpleology.com

Throughout the history of religion, dance has been a way of expressing that deep religious sense of glorying in, being in tune with, being in step with, God and the Universe. Doubtless because it is a way of expressing something deep and powerful, dancing is there in virtually every major religion, from the prehistoric wall painting to the whirling dervishes, from the Buddhist and the Shinto dances to the Hindu Shiva “Lord of the dance.” —The Rev. Andrew Sails, the Mint Methodist Church, Exeter

Lord of the Dance

Dear Itchy — Your parents surely believe that they are doing what’s best for y’all, but Honey, the Scriptures command the Children of God to dance. Show your folks this passage from the Book of Psalms:

Sister Alma Rose does not know what a timbrel is.

Sister Alma Rose still gets goosebumps when she recalls the first Dancing Classrooms* performance she ever saw — dozens and dozens of fifth-grade children, mostly from poor families, the boys in crisp white shirts and ties, the girls in their Sunday best, solemnly waltzing or gleefully stepping to the Swing.

Then and there, Sister Alma Rose decided she wanted to teach in the Dancing Classrooms program, and so she did, and everything she’d heard was true: The first class, about half the kids was suspicious and surly, and the boy children and the girl children acted like each other had the pox. The second class, they was cautiously interested. The third class, they was having themselves a fine old time and all but cried when the session was over. After ten weeks, the shy children had blossomed; the aggressive ones had learned courtesy and discipline.  (Studies have shown that Dancing Classrooms alumni do better socially and academically than their peers.)

Dancing heals. Dance can be sacred. Dance is as necessary as a heartbeat and as instinctive as an inhalation. And Honey, if y’all can’t persuade your folks to allow you to dance (and y’all keep trying — be persistent, but don’t y’all whine or nag), then at the very least you can tap your toes to dance music and heighten y’all’s immunoglobulin-A levels. Sister Alma Rose herself prefers listening to reels and hornpipes and the music of Riverdance; they do get her blood goin’.

In your night, I dance in misty morning
song, an emissary of the dawn, but not
quite tame enough, perchance, to be a
ray of light, nor yet an angel – how I
yearn to gain the discipline – but God
indulges me and smiles, and pulls me
home when I exhaust myself with
roaming through the galaxies and being
tossed about by solar winds and such. Then
I regain my balance and remember what I
meant to do – I, an emissary of the
dawn, assigned to strew the sky with
pearls before the sun breaks through. But
first I have to loop and twirl, unable to
resist, and stop to scoop a bit of bright
and ancient, innocent delight from moon
and sun and distant star. And then I go to
where you are, as torch or candle – more,
according to my whimsy, though, as
pixie-light; and there I hover at your
bedside, loving you with radiance that
spreads above and then around you. Warm,
you smile, believing that you dream,
but I am genuine, precisely as I seem, as
God created me to be – an emissary of the
dawn, a dancer in the morning song, one
who meanders as unweary time looks on.

* The Dancing Classrooms phenomenon started in the early 1990s with one man’s vision. Pierre Dulaine began Dancing Classrooms in 1994 with a single fifth-grade class of thirty students. The program has grown to some twenty thousand dancers a year in New York City alone. Dancing Classrooms expanded to Omaha in 2006 and has since spread to several other U.S. cities and Canada. Get Dancing Classrooms going in your city! (Check out the feature film Take the Lead and the stirring documentary Mad Hot Ballroom to see what all the excitement is about.)