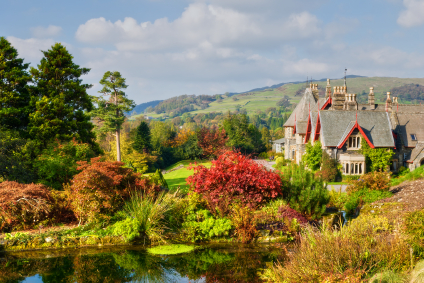 Elizabeth Anna's house outside of Hilltop

GRACE means you’re in a different universe
from where you had been stuck,
when you had no way to get there
on your own. —Anne Lamott, Plan B

What’s So Bad about Feeling Good, Part 2 of a True Story

Sister Alma Rose’s friend Elizabeth Anna is 65 years old. As I mentioned in “What’s So Bad about Feeling Good, Part 1,” Elizabeth Anna, who has been living in Wales or some place for the past several years, came back to Hilltop last month for a visit, and to decide if she wanted to move into the house outside of Hilltop where she was born and raised, which is a fabulous mansion with servants and poultry and some sheep and cows and lots of horses, not in the mansion, of course, although Elizabeth Anna says that it would have been just fine with her daddy if the horses had lived in the house, because he was a breeder of racehorses, like his daddy, and his daddy before him, et cetera, but he is deceased and so is Elizabeth Anna’s mother…

…who was descended from the Welsh noble Owen Tudor, whose wonderful Welsh name was Owain ap Maredudd ap Tewdwr, of which I am sure the pronunciation is not as silly as it looks, but the important thing about Lord Tudor, or whatever they called him, is…

…he was the grandfather of King Henry VII of England, who was the first Tudor on the throne, and after him came his son, King Henry VIII, he of the six wives, and then Henry died and his heir, a poor, sick little boy whom nobody really cared about because his mother, Jane Seymour, was dead, had to be the king, under the name of Edward VI, while powerful men ran the show and otherwise neglected him, and when he died his half-sister Mary became Queen Mary I, who started out being popular but, unlike her half-sister Elizabeth, Mary didn’t think that she could rule without a king, so she married King Philip II of Spain, and then, of course, she was supposed to have a bunch of strapping sons, but she was unable to do that, and Philip was canoodling with Elizabeth when he wasn’t away fighting in some war, and Mary became bitter and dogmatic, and she was nicknamed “Bloody Mary” because she had hundreds of people burned at the stake for not being Catholic…

… and then she died and Henry’s bastard daughter Queen Elizabeth I was crowned and things in England got back to the way they ought to be for the forty-five years or so that she was queen, until she died in 1603, and that, unfortunately, was it for the Tudors. 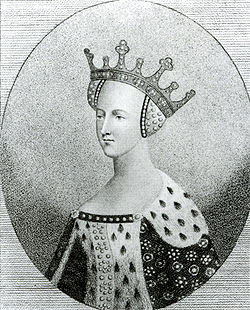 But Elizabeth Anna is not exactly related to the kings and queens, just Owen Tudor, who had children like there was no tomorrow, including but not limited to six children with his secret wife, Catherine of Valois, who was also married to King Henry V of England, and this is the honest truth, but in medieval England that sort of goings-on was just about normal for the aristocratic set, as was the way Owen died, which was being beheaded.

Now, here is what Sister Alma Rose told me about Elizabeth Anna, and this is a true story:  She has had a very unhappy life. Her preposterously wealthy parents — who actually lived rather simply themselves, no fancy cruises, no showy diamonds or rubies or furs, and who were also very generous to the poor and suffering — were determined not to spoil this pretty little girl, though she was their only child and though she was growing up on a fabulous estate in a stunning house surrounded by rolling hills on which to ride her horse, Robin, named after Robin Hood, the legendary English outlaw, who, in the 12th century or thereabouts, stole from the rich and gave to the poor, according to folklore. And that maybe ought to have set off warning bells, not Robin Hood, but Elizabeth Anna’s naming her horse after him.

“Her folks taught her to be generous and to share,” Sister Alma Rose recalled, “and she was such a serious, conscientious little thing, she was always inviting the poor children of Hilltop to her house and stuffing them full of homemade bread and muffins and cream-cheese pie her mama fixed, and giving the little girls her pretty dresses and her dolls. And, Fanny, don’t y’all know that one day her mama heard Elizabeth Anna weeping piteously, and she asked what was the trouble all about, and Elizabeth Anna said, first off, that she, Elizabeth Anna, was the most selfish girl ever born and Jesus must hate her because she would never let the children ride her horse, Robin, and the other thing she was sad about was, she said, that she had given practically everything she had to the poor children until she was literally wearing the same too-small dress to school every day, but the little girls never wore the clothes she gave them and they still lived in their poor falling-down houses and they still weren’t getting enough to eat and Elizabeth Anna didn’t know what to do. And, Fanny, I have to tell you, a jealous, spiteful woman in her church, whom I went and had a chat with when I found out what she done, was just making everything worse, and Elizabeth Anna always came out of Sunday school trying to hide her tears.

Children in India, from http://www.colorado.edu

“She told her mama that in the Sunday school class, her teacher was unkind to Elizabeth Anna because she was a little rich girl and she should be ashamed of being wealthy when children were naked and starving all over the world and here was Elizabeth Anna with her mansion and her horses and her rich parents who could give her everything she wanted.

‘Somebody should have helped‘

“This was a child who tried to take all the troubles of the world on her little shoulders at the cost of her own joy, and somebody should have helped her long before they did. But folks looked at her and all they saw was a little girl who could have anything that money could buy.

“Of course, coming of age in the 1960s, as Elizabeth Anna did, she was ripe for recruitment into the Civil Rights Movement, starting with the Mississippi Freedom Summer in 1964, and she was beaten and arrested more than once trying to help black folks register to vote, and her mama and daddy was so proud of her, not understanding. Because it was a wonderful thing that was done that summer, but Elizabeth Anna never should have been part of it, because she wasn’t strong. All she did was she got more and more depressed. She looked around and saw the pitiful way that many folks lived, and she felt like however hard she worked and however much she gave, it would never be enough. She told me it seemed like every time she did something to help one poor, desperate soul, ten more sprang up in their place.

“And at the end of that summer Elizabeth Anna’s mama and daddy got a phone call saying that poor Elizabeth Anna had tried to kill herself with pills, which nobody knew where she got them, but somebody had found her passed out on the floor of where she and a bunch of kids was living, and got her to the hospital, and as soon as she was out of danger her dear mama and daddy took her home. They moved her bed into the big solarium, which was windows on three sides, and they filled the room with ferns and Elizabeth Anna’s pretty furniture and all her books, and that was where Elizabeth Anna lived for the next five years, with a psychiatric nurse called Eleanor, who was an angel if there ever was one, staying with her.”

The Rev. Dr. Martin Luther King giving his "I Have a Dream" speech during the March on Washington, August 28, 1963

Sister Alma Rose told me that for the first six months Elizabeth Anna didn’t say a word. She just sat in her chair, dressed in a beautiful old-fashioned white cotton nightie, looking out the window while Eleanor washed her and braided her hair and talked to her as if Elizabeth Anna were paying attention, which she might or might not have been. And sometimes Eleanor would say things like, “How much good would you be doing in the world if you had died? And look at you now, as sick with guilt as you’ve made yourself, could you even take a pen in your hand and write one single letter to a soldier in Vietnam? Or serve one single meal in a soup kitchen?”

Eleanor had her own pretty bedroom right beside the solarium. She told Elizabeth Anna’s mama that she, Eleanor, had been a social worker and she had loved the work, having, she said, “a stronger sense of who I was than that sad little girl in there ever had” (gesturing to the solarium) and being “called to the job out of love and not out of guilt.

“I quit because the bureaucrats and the regulations and the paperwork kept me from doing my real job,” Eleanor said, and then she went to school to become a psychiatric nurse, “and that was a calling too.

“Suffering is suffering,” Eleanor said, “whether the sufferer is rich or poor or black or white.”

After a year or so back home, Elizabeth Anna, who now says she rose from the dead by a miracle of God’s grace alone, because she sure couldn’t help herself — Elizabeth Anna asked Eleanor if she could find out about someone serving in Vietnam who wasn’t getting any mail, and Eleanor did, and that was the first of thousands of letters that Elizabeth Anna wrote to men and woman in uniform.